Ask for a quote
Expertise

The manufacture of pillow plate by DVAI

The pillow plates in stainless steel are also called « dimpled plates » and they are used in thermic exchanges, for heating or cooling down a circulating product.

A pillow plate is composed by two stainless steel plates welded together by a laser welding machine which follows a circular weld pattern.

The thermic fluids able to flow inside the pillow plates are:

These are the different steps for the manufacturing of a pillow plate barrel :

01. We cut the plate for the barrel from a sheet in stainless steel. The expansion length is calculated in neutral axis (half of the thickness of the barrel). Another sheet approximately 1 mm thick is welded upon the base plate using the laser welding technology.

03. We weld the barrel by a “weld seam” or “longitudinal weld”. This operation is achieved by plasma TIG automatic welding method.

04. We pass the barrel on the rolling machine a second time to give it the roundness not obtained before.

This step can be done either by DVAI or by our client.

05. Shell hydroshapping: this step is done by the client and it consists in the inflation of the pillow plate to allow the thermic exchanges between the fluid inside the vessel and the circulating fluid inside de pillow plate.

The pillow plated barrels are perfectly adapted in food and beverage applications (winemaking tanks, fermenters for beer…), chemical industry (reactors, temperature maintenance tanks for heating and cooling processes). This reliable and simple solution has been imposed in all kinds of industries worldwide.

There are 3 kinds of possible applications:

The reliability of the spot welding assembly assures an optimal result.

After reception and validation of an order, the technical office designs a drawing presenting:

This drawing is submitted to the client for validation

Manufacturing starts immediately after the client’s agreement enabled by DVAI’s complete stock of plates as well as all the machines necessary for the cutting.

Pillow plates are delivered non-inflated along with the installation notice for the in and out connexions and helpful advice for inflating and eventual repairing. 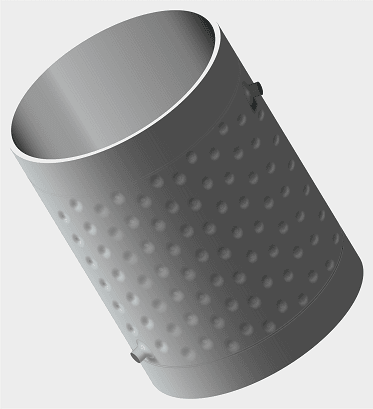